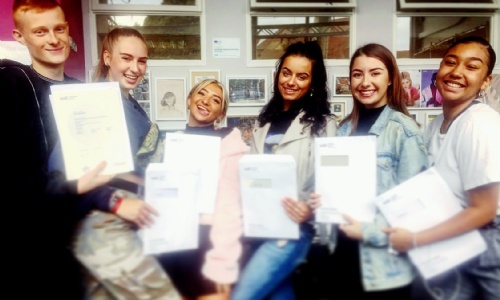 It is a great day for vocational and academic achievement at The BRIT School and once again we are delighted with the students’ exam results at Post 16 which reflect their hard work and dedication to their studies.

At a time when the educational debate is about how to support students from lower-income families, we are particularly proud of the outcomes and destinations of our disadvantaged students; 46% of which have accepted University places, which is significantly above the national average.

224 students (48.28% of the cohort) gained a Distinction at UAL which is the highest possible grade and is the equivalent of three As at A-Level.

The BRIT School achieved a 100% pass rate with BTEC Level 3 certificates which we offered in addition to students studying UAL, including 42% Distinction*.

The BRIT School had strong A-Level results including 71% A*-C grades and 40% A*-B grades.

Students commit to a rigorous curriculum specialising in a performing or creative arts vocational qualification and some students also undertake additional A-Levels or BTEC certificates.  It is the School’s inaugural year of delivering the UAL Level 3 Extended Diploma, which is equivalent to 3 A-Levels.

“This has been a rewarding set of results. The UAL curriculum enables us to deliver an innovative contemporary and industry ready qualification which puts us at the cutting edge of creative education. It’s an exciting blend of academic rigour and vocational excellence allowing our students to access degrees at the highest level, to train at the best vocation al schools in the UK or to successfully transition into the world of work. Our students have risen to the challenge with a set of outstanding results.”

As well as studying the UAL qualification, the following students also achieved academic excellence in their additional A-Level results:

As a vocational school, we are particularly proud of the destinations our students are going onto. Already 216 students have accepted UCAS places including 22 places at UAL institutions, 11 at the Royal Central School of Speech and Drama, notably five students from our pioneering Community Arts Practice course. We are also delighted that 27 graduates will be going onto Russell Group University degree courses studying creative and performing arts degrees as well as taking up such diverse subjects as Anthropology, English, African Studies, Mathematics and Music, Computer Science, Philosophy and American Studies.

In 2018, 97% OF STUDENTS HAVE EITHER GONE ON TO FULL-TIME EMPLOYMENT AND/ OR HIGHER EDUCATION